The Blood Spell was a highly anticipated novel for me. Having stumbled upon the 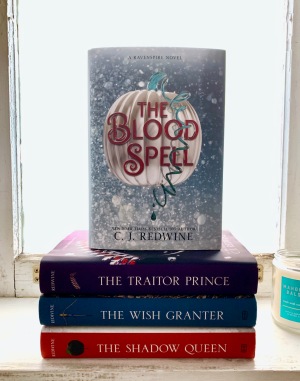 Ravenspire series this past summer–I knew it was a series I wanted to remain invested in from the very early chapters of its debut installment, The Shadow Queen. It’s this same series that actually rekindled my love for voracious reading and even birthed my desire to start a Bookstagram page, and not soon after, this very blog by the same name. I went so far as to even pre-order this book and I honestly haven’t done something like that since the Harry Potter series was new. In March I began reading it with hungry eyes and high hopes.

Blue De La Cour is a young girl with a flair for alchemy, a father who adores her, a gnarled but devoted cat who’s seen better days, and a secret that she keeps hidden in her veins. Her family is close friends to the Royal family but that doesn’t mean that she cares for the crown prince and all of his irresponsible antics. Her and her father run the village alchemy shop in their quarter, providing salves, creams and other concoctions to the villagers. It’s been quiet and prosperous in the village ever since the Blood Wraith was locked away deep in the forest. Everyone is safe and magic was banned in all the land so as to ensure another Blood Wraith wouldn’t ravage the village ever again. Blue enjoys her quiet life in the farmhouse with her papa, their alchemy shop. She enjoys her garden and her cat and the way her hands seem to know which plants and minerals want to be combined together into a potion. She has an especially soft spot for the villages homeless children. Her determination is to figure out how to successfully turn lead into gold so that she can use the gold to ensure homes and proper care for all of the homeless children.

Blue’s life takes a tragic and unexpected turn and a wicked woman and her two less than wonderful daughters enter her life. It becomes clear early on that this woman has something up her sleeve and does not hold any kind feelings for Blue. She endures abuses at the hand of this women who seems to be driven mad by the thought that somehow Blue has the answers she seeks. Desperate to keep her happy and avoid any more strife, Blue agrees to share her knowledge of alchemy and creating gold. But she has no idea just how much this knowledge has and will further cost her.

This standalone installment loosely follows the tales of Cinderella. In true Redwine fashion, we’re talking super loosely based in my opinion which is fine by me–I just love a good retelling anyway. The story line and characters are reliable, if not altogether, predictable. Again, I’m fine with that. However, once I got into the novel, it just felt a bit slow for me, and honestly, too predictable. It was the typical disenfranchised main character, the far off well to-do supporting character, the improbable dilemma and of course, the hopelessly romantic love story. This has been the sequence of event for this entire series so it’s not that I was disappointed or even caught off guard. It was just all the moving pieces in-between all those sure steps that sort of bored me. There just wasn’t enough anticipation built up to the parts that led you to the next big thing. I don’t think the book actually picked up for me until somewhere in the second half and I think that’s only because all of the parts were finally moving in conjunction to one another and there was constant action. If I’m honest, that’s how the 3rd book, The Traitor Prince, felt to me as well. I was hoping for more with this book but I don’t think it quite delivered. All in all, I have to give it three stars. The part of me that feels hopelessly committed to finishing a series once I start will probably read any future novels born to this series…but the part of me that’s given two consecutive 3-star ratings, might but it on the back burner until absolutely necessary.