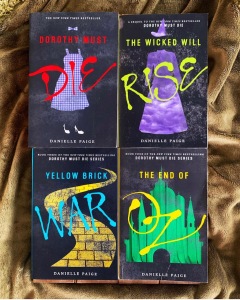 I stumbled upon this series earlier this past summer– before I had a blog where I could really talk about it. I think it was just one of those things where you’re moseying around the book store and a bright spine with neat font catches your eye. There are a few things that make a book a “sure-buy” if I’m out and about: 1. Is it YA or Fantasy? Will probably buy. 2. Is it a retelling? Will definitely probably buy. And 3. Is it a series so the ride doesn’t end too soon? *shoves book(s) in arms and runs to checkout*. This series, of course, checks all those boxes.

I have to say, I’ve never actually read the original The Wizard of Oz–don’t spear me. I would love to someday but it’s never really hit my radar. I have seen the movie though so I get the gist of the storyline and was able to make some parallels and pick out where Danielle Paige added her own flair and twists. In this series, Dorothy, the Tin Man, the Cowardly Lion and the Scarecrow are NOT the characters you probably grew up knowing. This series put a sort of dark and sinister spin on the story we all know and love and I was 100% down for it. After all, too much “good” could actually just be evil.

Amy Gumm is a regular girl living in Kansas. Her mom is strung out on pills and her dad left years ago. She’s not very popular in school and doesn’t have any friends. After a fight with the resident “it-girl” at school, Amy is suspended and sent home early. The weather is calling for a bad storm and despite the advice to take shelter, Amy’s mom leaves her home alone in their dumpy trailer to go drinking at a bar. The storm comes in hard and a tornado picks up Amy’s trailer and whisks her away. And that’s when her life changes forever.

Amy ends up in, you guessed it, Oz, with nothing from home except her mom’s pet rat, Star. In this version of Oz though, Amy comes to learn that Dorothy is the bad guy. She’s taken over Oz and is pure evil. The Tin Man, Cowardly Lion, and Scarecrow aren’t friends either, they’re Dorothy’s evil minions. But how did Dorothy get back to Oz? Apparently she found a way back with her magic shoes and usurped Ozma, Queen of Oz, then all the power got to her head and now no one is safe in Oz.

Amy meets some friends upon her arrival; Indigo, an angry cursing Munchkin, Ollie, a wingless flying monkey, Nox, and the witches, Glamora, Gert and Momby (there’s Glinda too but she’s pure evil). She learns of the Revolutionary Order of the Wicked and is recruited to join where she is trained to fight. Oz is not the happy-go-lucky place Amy remembers from the book she read in school–it’s dark, mysterious and a little creepy.  The Munchkins are sad, the yellow brick road is losing its color and crumbling, and the magic is being slowly drained from Oz. Someone has to take Dorothy down and restore order to Oz, and that someone is Amy Gumm. Dorothy must die.

Danielle Paige does a wonderful job with the character development in this book. She

spends a lot of time going into everyone’s back story and it’s done in such a way that it really paints a complete picture for you. The transition from good Oz to evil Oz is a smooth and effortless one and she pulls you right into the turmoil that is plaguing Oz. This is totally the “what happened next” story following the real Wizard of Oz novel.  This is one series where I so wish they would do a movie. I could totally see a mashup of Tim Burton’s Alice in Wonderland meets Nightmare Before Christmas and I think it would be EPIC!!

I enjoyed the last two books, Yellow Brick War and The Wicked Will Rise, a bit more than I did the first two book, Dorothy Must Die and The End of Oz. Not for any particular reason other than I think it just took a bit to lay all the ground work and build the plots and become truly invested in them. I also love the underlying message about finding yourself and staying true to who you are. That’s the big journey that Amy undertakes as she’s navigating Oz and trying to kill Dorothy. By the end of the series she truly comes into her own and is happy with who she is and the life that she has.

So, 5/5 stars would recommend this series if you’re into retellings, Oz or just a in the mood for a good YA series. I’d definitely take a 5th book for this series any day but I’ll keep my fingers crossed for a movies someday, instead.